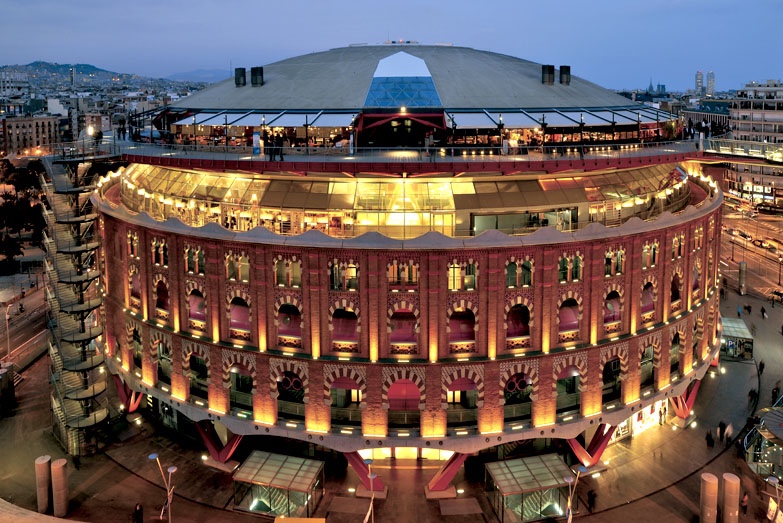 Posted at 17:04h in Uncategorized by cmga 0 Comments
0 Likes

Las Arenas Mall of Barcelona: History of a transformation, the story of our home.

This article is dedicated to our house, Las Arenas Mall of Barcelona. We will make a trip back in time where we will explain the most important curiosities of this environment so majestic and unique.

Sharpen your imagination and wit, the journey begins!

More than a century ago, in 1900, the bullring Arenas of Barcelona, of neomudéjar style, was built by the modernist architect August Font i Carreras.

The idea of building the Arenas in Plaza España is because the old bullring of Barceloneta El Torín, had become too small before the increase in population and the fondness Catalan bullfighting. Therefore, it was decided to undertake the construction of a large bullring at the height of the importance of Barcelona.

Also of bullfights, the Arenas de Barcelona has witnessed some other important events of citizen life. Significant events such as the historic 1919 speech of Salvador Segui, “Noi del Sucre”, reporting on the agreements reached with the government following a strike that lasted 44 days, becoming general strike paralyzed Barcelona and 70% of all Catalonian industry. It was a great success for the Spanish labor movement, getting better wages, reinstatement of dismissed workers, the release of thousands of workers arrested during the strike and the Decree of the eight hours of work, making Spain the first country that enacted these workers claim.

Another notable event was that during the Spanish civil war, the square became republican army barracks. After the war, in addition to bullfighting events, it functioned as large dynamic element of the neighborhood and the city like sporting, artistic and political events.

The last bullfight was held on 19 June 1977, being the Arenas virtually unusable until June 2000 architectural studies Richard Rogers Partnership and Alonso – Balaguer Arquitectos Asociados, get the assignment to transform the old bullring in a commercial, cultural and leisure space.

After construction and remodeling necessary, the opening of Arenas de Barcelona shopping center finally took place on 24 March 2011. The result has been a spectacular building that integrates tradition and modernity maintaining its original structure and attaching the dome. It has become an icon of Barcelona and its inhabitants, which also you can amaze with panoramic views over the city. It offers a great shoppings, entertainment and dining, to meet the needs of both public, residents as national and international tourists visiting the city each year.

We wanted to be part of this extraordinary and curious history of the Arenas, a compelling reason to establish a reference restaurant in Barcelona with panoramic views, the perfect place to open Abrassame.