Posted at 13:55h in Uncategorized by cmga 0 Comments
0 Likes

The other day was World Croquette Day. Thanks to taking ingredients from other dishes and not throwing food away, many delicious dishes have emerged, and one of them is our delicious croquettes.

To tell the truth, they are not so ours … in fact we have awarded them in our list of star Spanish tapas, although the origin is not very clear, it seems that the Romans already ate something similar to croquettes. However in reality it was the French who devised the recipe most similar to the one we know today and baptized them with the name of croquette, which in English means crunchy.

The first croquettes came out in 1691, appearing in the recipe book of the French chef François Massialot. They were somewhat different from the ones we know today. They did not have béchamel and he made them based on a mince of meat, egg, truffle and herbs, then he passed them through eggs and bread crumbs. In 1817, Antonin Carême was the one who added bechamel to the croquettes, being more similar to those we know today.

Croquettes have evolved like a living being, always adapting to the environment. Now, there are even bars and restaurants specializing in this delicacy.

We, to honor this delicious delicacy, what better way than to share the secret with you of our homemade Iberian ham croquettes from Abrassame recipe, because share is live 🙂 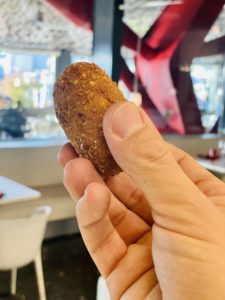 We start with the ingredients, to make about 40 croquettes approximately:

At Abrassame we use the ends of DO Salamanca Iberian ham, but at home it is better to buy it already chopped at Mon Ibèric, so you will save yourself from separating the rancid parts and excess fat.

Having said this tip, the first step is to chop the onion and the leek into very small pieces, put the 110 grams of butter in a pan and once melted, add the onion and the leek. Once everything is well poached, add the 100 gr of flour and sauté for 12 minutes, stirring gently, always with a wooden spoon, so as not to damage or grate the pan. Meanwhile, heat the half liter of milk and mix it with the ingredients in the pan and cook over a very low heat for 40 minutes.

Once the 40 minutes have elapsed, add the Iberian ham, add salt, if necessary, pepper and the nutmeg. Once the dough starts to peel off the sides of the pan, add the liquid cream, cook it over low heat for 10 more minutes, remove from the heat and let it cool.

When the dough is cold, make balls of approximately 30 grams, pass them in flour, then in the egg and finally in the breadcrumbs.

We already have the croquettes, now what would be missing? Yes, fry them! In a frying pan we put extra virgin olive oil to heat and, be careful, introduce the croquettes once the oil is very hot and remove them when they are well browned, make sure they do not burn or remain raw inside. Cover a plate with kitchen paper and put the croquettes on top so that they soak well and thus eliminate excess oil. Then put them on a plate that you like, serve and eat Abrassame croquettes! enjoy your meal.

In this case, the star ingredient is Iberian ham, but you can use this same recipe by changing the ham for chicken, mushrooms, cod… the ingredient that you like the most. Or if you feel lazy, you can also come to the restaurant, and we will make them for you with sweetness and care.